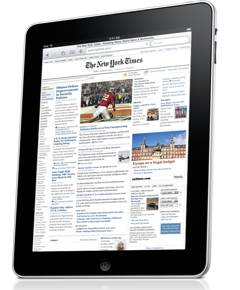 There have been varied reactions to the iPad but those that most interest me are those that go beyond Apple's marketing message of "the iPad is a new thing that will revolutionize computing" and ask "where will this revolution lead?"

An angle I find especially interesting is expressed in Alex Payne's On the iPad.

What I find most interesting is how he speaks to the side effects that Apple's choice to keep the iPad closed may have for future engineers. The closed system may result in the loss of that magic moment when a future engineer sees behind the curtain.

To set up the binary: iPad is for users, personal computers are for inventors.

That magic moment where you see how the machine works and the code invites you.

These invitations are the reason that many of us became engineers. The concern is that without that moment we'll lose some of the innovators of the future.

I remember that moment and the effect it had on me, so I'm partial to the concern. But I don't see that concern playing out in my children's lives nor am I entirely convinced it will in yours.

Another valuable angle is: the binary is a false one.

My Dad would love to have an iPad. He likes computers but the iPad epitomizes the "just show me what I want" approach that he's hungered for in a computer for a long time. He doesn't care about command lines or when abstractions leak. He wants his applications to just work. Email, social networks, office documents. Having a device that lets him do that with minimal thinking about installation or configuration would make him very happy and he wouldn't feel that he'd missed out on anything.

I have a hard time criticizing that as an experience designer. There's a device coming that's what he wanted. My internal dialog about "it looks like a giant iPod Touch," "you don't actually create anything on this yet," "there's no chance to see the man behind the curtain," these things don't matter to many people. They just want the thing to work and work as transparently as possible.

The closed system will provide that for many people.

iPad in various respects isn't what I'd hoped for. I wanted something more open. At this point in time, the closed system is a feature. It lies on those of us who prefer the open system to provide an answer. How will we provide an open system that offers simple installation of applications that get out of users' way as much as possible.