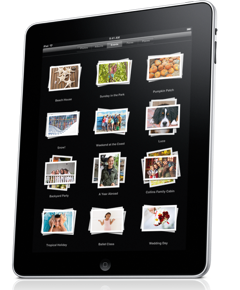 The long awaited Apple tablet is announced. We've had the opportunity to "see [their] latest creation." Time to consider what it all means.

Talking with friends about the iPad back when we were all still speculating on the name we came across rumors that dashed our early hopes. The tablet would most likely use iPhone OS and the App store as its sole path for software. A closed system.

From there my thinking went to how Apple would differentiate itself from humdrum tablet pc offerings already out there. iPad isn’t entering an empty category, it’s defining a category that’s been poorly executed and marketed up to now. (Remember Macintosh? Same kind of thing.)

How to do it? You focus on what iPhone OS and App store do best:

iPad does this and from what the marketing tells me, does it incredibly well. (Gotta love the gap between announcement and real world launch.) Reading about the product left me a bit flat. My impression seeing video of the email app I think they’ve done some very cool things in customizing the built-in apps to a tablet and leverage options that aren’t available in the smaller iPhone form factor.

A few years back a key piece of Apple’s marketing message was that the Mac and the iPod were products for your digital lifestyle. The Mac served as the hub for this through the iLife applications. Photo albums, home movies, and garage band recording “for the rest of us.”

iPad is by nature a digital lifestyle device. It’s not for coding. It’s not for heavy duty design or video work. It’s for stuff that I would do on my couch while watching TV. It’s for showing stuff off to my friends when we’re talking in the living room.

Given iPad’s digital lifestyle leaning I’m surprised we didn’t see adaptations of all the iLife apps at launch. I can’t help but think that Apple project teams are currently working on iPad specific versions of iMovie and Garage Band. These are use cases tailor made for something less than a laptop but more than an iPhone. (Add camera and mic to the iPad and iMovie just got even better.)

Until Apple or approved third party apps fill this space iPad will miss a key audience. The current iPad will draw people with cool factor, but as many have noted, it’s a device that’s all about consumption. Many of us want to create on our devices and share those creations off-device (and Microsoft, HP, that’s exactly where you strike back against the iPad).

The most touch-native path to letting people create on the iPad is visual. Leverage the visual and audio-focused digital lifestyle applications that have already proven themselves then expand from there. Let me sync my creations to a computer or hard drive on my wireless network without having to use MobileMe and I’ll lay down the coin right now.