This has been sitting in the drafts folder neglected for a good 7 months, time to let it free... 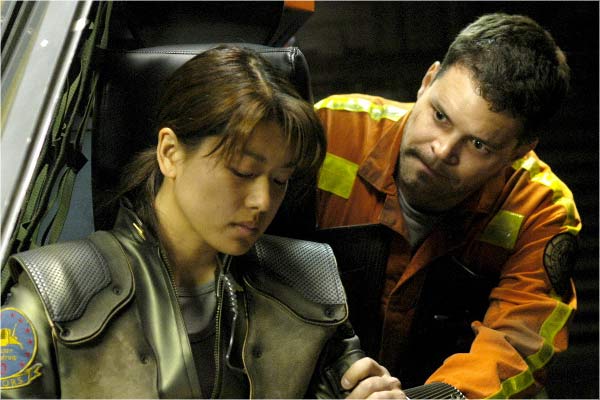 Though I didn't make it a priority when it first hit, the new Battlestar Galactica series has had my attention since last spring. Being a latecomer to Firefly, and having decided to try and catch some of the Buffy episodes I'd missed on DVD, I already had plenty of tv to fill any time I felt like devoting.

I enjoy BSG at a general level, but one very specific thing impressed me from the start: the series' narrative allows the Cylons (the androids that looked like chrome toasters in the original series) their reasons for fighting against the Colonials (the humans looking for earth) and allows them their beliefs about what they're doing. The structure More and Eick have chosen for conveying the story gives viewers a look at the Cylons' "side" of things, and their activities when "unobserved" by the Colonials suggests that their belief that they're doing the work of god is sincere. ((At the time I wrote this, 6 was the primary speaker for the Cylons, Leobon was the only other self-aware (non sleeper) Cylon that had really spoken. Since finishing Season 2, I'd only qualify it with a "some Cylons' belief is sincere."))

I find this refreshing in contrast to the treatment of the machines in the earlier parts of the Matrix series. (I'm specifically speaking from having seen The Matrix, The Animatrix, and Matrix Reloaded.) To be fair, it's a question of where the viewer's placed as the story's told. The audience is led to identify with the humans and in the original Matrix film, never leaves the psychological perspective of the human characters, where BSG allows the viewer to experience both subjectivities, if only briefly on the Cylon side. (Since I wrote this we got to stretch around in 6's head for a bit, so a little less on the "if only briefly." Excellent television.)

The Animatrix provides further insight into what led to The Matrix continuity's human-machine war in the history segments (The Second Renaissance). These sections aren't entirely unsympathetic to the raw deal the machines got from humanity, but even with its sympathies, the story is again told from the human's side. Matriculation's "machine rescue" story provides the best look into machine subjectivity, but again we run into subjectivity problems in the final depiction. We see problems with humanity in the way the "rescuers" are happy to use human friendship, romance, and sexuality to coax the machines into switching sides, but unwilling to extend actual friendship, love, or sexual contact. Problem is, in the end the depiction leads us to sympathize with the rescuing woman's horror at a machine wanting to be romantically involved with her. The machine is depicted in a form that's just too alien for viewers to fully empathize.

So I find the BSG approach a refreshing change. The machines may be at least partly right. Right or wrong, it recognizes to some degree that "you can't play god and then wash your hands of the things you've created." It also doesn't make the too frequent assumption in sci fi that machines can't possibly have any claim to spirituality because they're not biological creatures like us, as if biology were the key to the soul.